Last week at this time I was setting up my gear for what was the TEDxBreda 2016 event in the Mezz. When I think back on this day, I can’t help but feel that time does indeed pass by incredibly fast. One moment we were brainstorming the theme with the group, the other moment I receive my name-tag on the day of the event. Long story short, we had fun making this event happen, the speakers were on point and the audience wanted more and more.

1. The theme and design

The philosophy behind Homo Ludens played a great role in this years theme – gamification aka Pause. Reload. Game on. The theme gave us so much potential for exploring the social and cultural aspects of today’s society, then again with a clear reflection on the past. Even our host Menno’s intro got me thinking of the context of mindfulness in games and gamification – grasp the present moment, reflect on it and be ready for the future (game on). Ambiguities aside, I loved the theme and it got me and the team excited for the possibilities it offers. Everyone games in one way of the other and each experience is different. As an avid gamer, I felt more than at home with the gaming-related talks and flavor of this year’s TEDxBreda. Thus the reason I created the image of this edition in 16-bit art, as most of us played old-school games on Nintendo DS or Sega.

2. The levels of applause

Our host Menno got the audience excited in the gaming context by introducing the applause leveling system. Basically the applause range from Level 1 – “Meh”, Level 2 – “Yeah, this is great” to Level 3 – “Awesome, I will Google this later”. Surely enough, Level 3 and beyond was reached.

Arnoud van Werkhoven’s talk on social shipping solutions was backed-up by this random plastic giraffe on stage. It looked funny and kind of out of place.

4. The Face of Leonardo

At TEDx we often show videos of famous TED talks during an intermission between talks. Admitedly well-known, I did not heard of this beforehand but there it was, the presumed face of the great master Leonardo da Vinci.

Itai Ivtzan had us all stop for a moment of clarity. Yoga is beyond intricate positions or being flexible, it is the means to quiet the primitive brain that just goes on and on like a broken typewriter.

6. The New Learning Experience with Loren

Loren Roosendaal addressed the faults in today’s educational system and how we can change the way we learn. With the development of an organisational e-learning tool called Knowingo, everyone can learn new skills and knowledge in a fun and intuitive way.

7. Not all gamers are anti-social couch-potatoes

It is about time to change the perspective we have on the gamer and smash the stereotype of gamers as a lazy, anti-social couch-potato. Jan Meijroos from Power Unlimited revealed the audience another side of the industry – the social aspect of gaming, games as a solid form of art and also the money behind this colossus.

Leon Winkler went from rags to riches, from a low-level starting point to being the full-event management mage at Ubisoft. With true dedication and staying true to himself, he managed to stay in the game and above it. So by all means, if you’re not famous yet, don’t hate the player nor the game – Get off your ass and level up to where you want to be.

At the University of Tilburg, Pepijn Rijnbout created a prototype designed for play. The glowsteps are decetralised system with the end goal of open-ended play.

On the hallway, people gather into small groups. I hear mature-aged people discuss Donkey Kong in one corner while browising boardgames. Others are approaching speakers for a small inquiry on their talks. Some people are taking a shot at having their professional photo taken at Wijnand’s booth. And like seemless NPC’s, the TEDx members roam around, carrying equipment, answering questions and working behind the scenes. There have been a number of great people I met, some of whom I’ve completely forgotten the name of by now but the point remains – TEDxBreda played a great game of inspiration and love and until next year, KEEP PLAYING!

The 1-up cupcakes: cute and delicious! 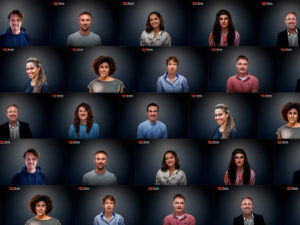 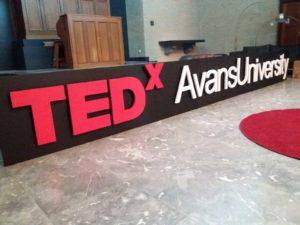